” Ansible is designed with a simple principle in mind: Automation shouldn’t become more complex than the tasks it’s replacing. You should be able to save time and effort through automation.” (RedHat + OpenSource)

Following the previous Introduction blog post on Automation in the Cloud , in this post you can learn how to start learning Ansible with hands-on exercises close enough to the future Cloud reality.

Same audience as in the previous Introduction post, but it’s time to do some hands-on.

To learn Ansible you need a minimum setup that will simulate real life, let’s call it the Ansible LAB, see the image below describing the lab you are about to build. With this Ansible Lab ready and reproducible within seconds or a few minutes tops, everytime you would like to reset it from scratch, you will be in a very good position to start learning Ansible and play various scenarios from the most basic ones to medium and even complex ones. And all at zero costs.

Some Linux background will help.

Hands on: build your Ansible LAB

There are 5 steps to build your Ansible LAB 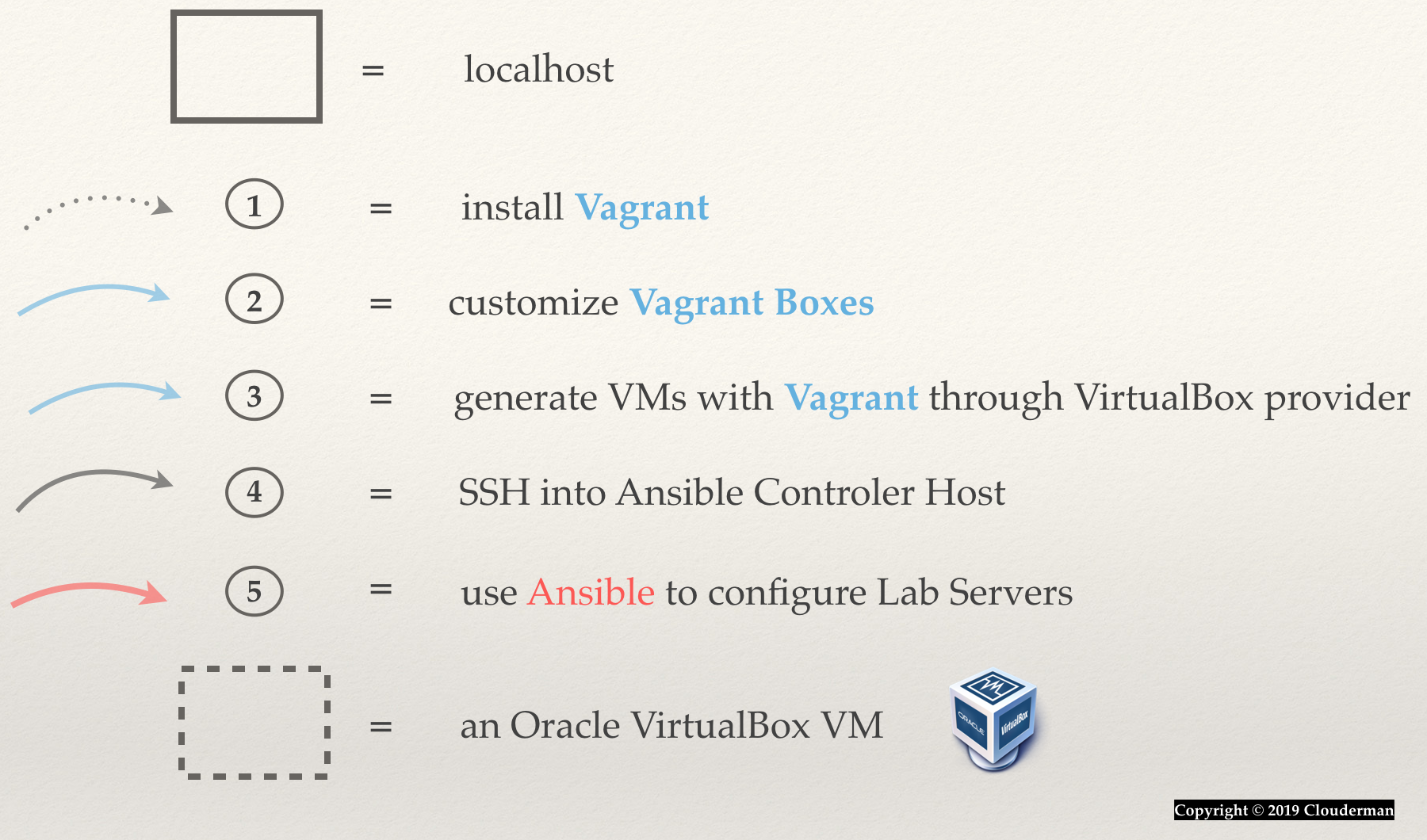 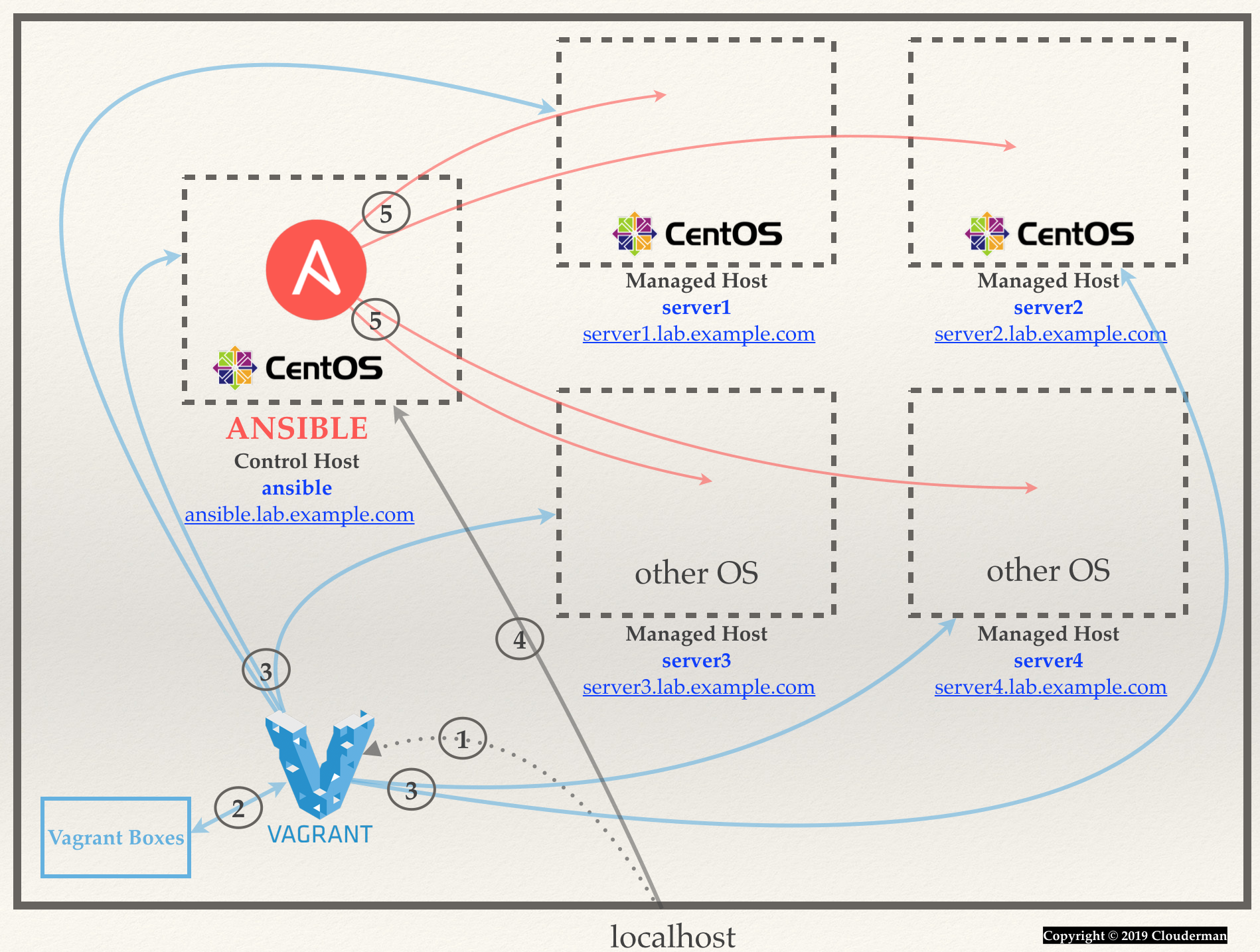 To build the Ansible LAB you will need to have the following minimum requirements:

Configure your localhost hosts file so it will recognize the Ansible LAB machines (use any DNS names you would like), as detailed in the Ansible LAB image I will be referring to the machines as follows :

Nothing really special here, just follow the Vagrant installation steps and guidance and you will be good to go.

! Be sure you will install VirtualBox Guest Additions before moving to next step !!

Vagrant has a very nice repository of images from which you can start to build your own OS and save it as a Vagrant Box for future reference.

For the purpose of this Ansible LAB we need to build 2 Vagrant boxes: 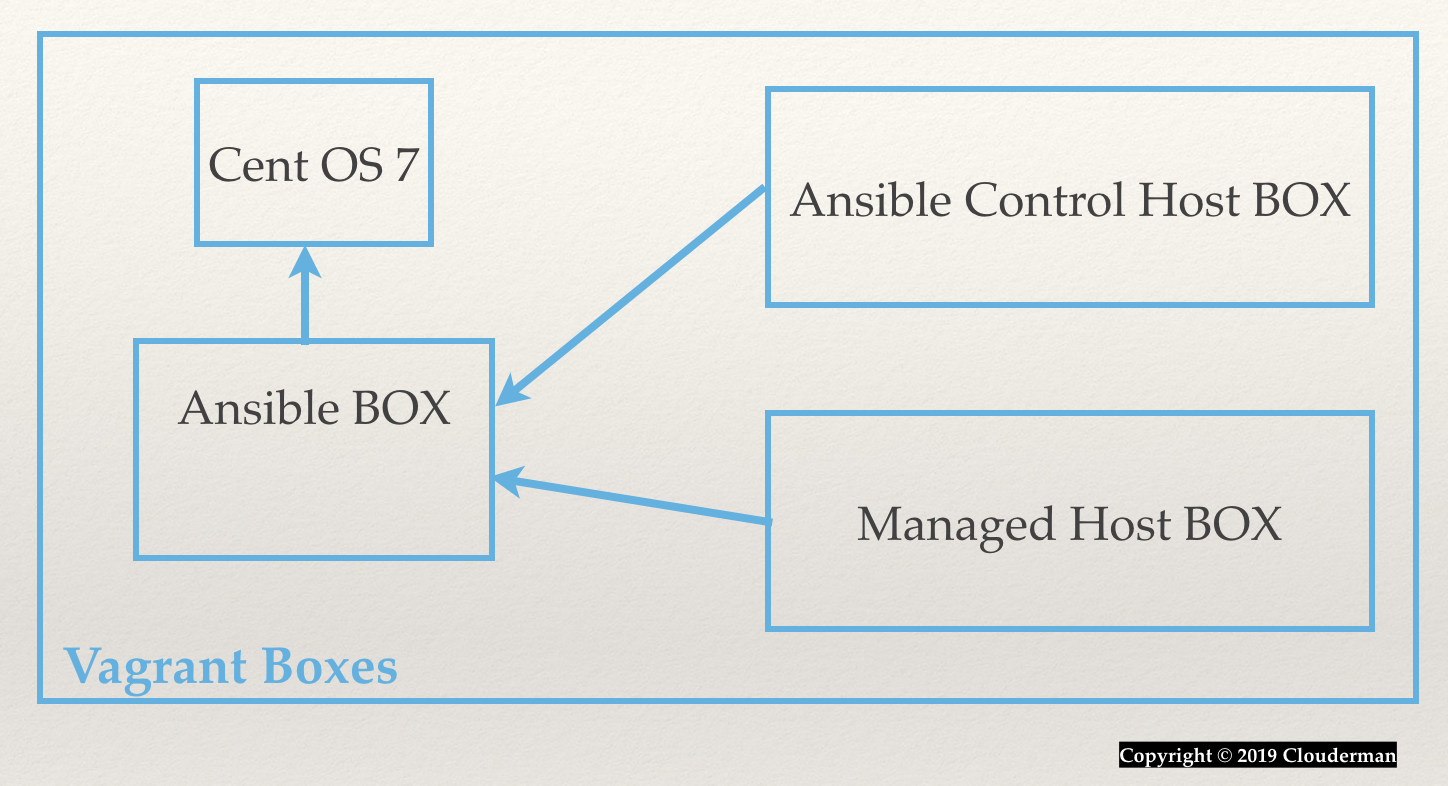 If you know nothing about Vagrant, in a nutshell: Vagrant launches VMs based on a Vagrantfile you will be editing. The syntax within this file is Ruby, but you don’t need to understand Ruby, nor to bother to learn this programming language in case you don’t know it, as the files will be intuitive to use and provisioned in the following, and very easy for you to alter as per your own needs later on.
So, to launch a Vagrant VM, from inside the folder where you created and edited your Vagrantfile, just type:

As mentioned already a few times so far, only CentOS was used in this Ansible LAB, and as such for Managed Host, we can use as the Vagrant Box, the already created CentOS LAB Generic AnsibleBox.

Follow similar steps to build Vagrant BOXes for other OS you would like to use as Managed Host or just download them from repo in your Vagrant BOXes on your localhost for easy access ( see next step).

Vagrant is powerful enough and instead of generating the VMs individually, you can automate everything by simply creating the following Vagrantfile ( in a folder of your choice, call it Ansible-LAB ):

Now, to build the Ansible LAB for the 1st time, all you have to do ( while in the Ansible-LAB folder ) is to run:

To bring the Ansible LAB back to its latest status, run again:

Step 4 – SSH into the Controller Host

From your localhost SSH with ansible user into the ansible Control Host ( aka ansible.lab.example.com )

Create a working directory and a test one:

If all ok it should output

Check again soon: by the time you will get familiar with Ansible ( working with dynamic Inventories, Ansible roles and so on … ), I hope to have some other Blog Posts ready, in which you could start combining Ansible with some of the major Cloud vendors and maybe even integrating with some other flexible tools, all to achieve IaaC ( Infrastructure as a Code ), Automation in the Cloud so you can get one step closer to a Continuous Delivery pipeline and all the other mandatory steps mentioned in the Introduction Blog Part.